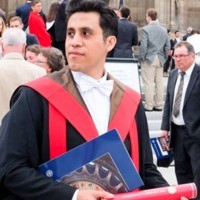 I am a native of Mexico with a bachelor degree in political science (UNAM), a master degree in history (Uppsala University) and I am about to earn my doctoral degree in history (Edinburgh University). The primary focus of my research is the different ways historians have interpreted the human experience. I am particularly interested in how American historians look at the past through the concept of democracy. My doctoral dissertation revolved around how one of the most influential historians, Charles A. Beard, developed a new way of thinking about American politics and history; it was partially a biography but mainly an analysis of the development of his basic concepts that helped him to make sense of the changing political and social realities of the Progressive era. This study represents an initial contribution to understand the relevance and meaning of the concept of democracy in the historical writing of the American Founding which I seek to expand. My overarching project seeks to present a diverse overview of historical approaches and concepts of democracy that tell the history of how modern American history has been made; it attempts to catch a glimpse of the scope and limits of the modern historical mind through American historians’ eyes. However my major interest lies in the process of interpretation and all the factors involved in it that may be common to any historical account in different fashions such as films, art, novels or different fields such as political science, law, and sociology. In this regard, I am especially interested in the understanding of the different conceptions of law and constitutions and how those guide historical research or inform American political culture.

Progressivism and the history of social sciences (Early Twentieth Century)